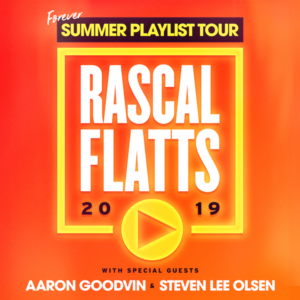 Rascal Flatts will continue their headlining tour into the fall with their newly announced FOREVER SUMMER PLAYLIST TOUR, a special run of shows in Canada kicking off on October 24th in Medicine Hat, AB.

The trio, who are currently on their stacked SUMMER PLAYLIST TOUR across the United States, have been praised for their show offering a “a nice night of pop-country hits with a little extra flair tossed in” (St. Louis Post Dispatch).

The guys have invited special guests Aaron Goodvin and Steven Lee Olsen to join them on the newly-announced Canadian run. Early access to tickets will be available for Fan Club members starting Wednesday, June 19th at 10am local time and ending Sunday, June 23rd at 10pm local time.

Tickets go on sale to the public starting Monday, June 24 at 10am.