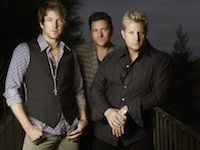 Rascal Flatts is one of the hottest touring acts in any genre of music selling over 7 million concert tickets in their career, and with this weekend’s wrap of the Farmers Insurance Presents “Changed Tour,” 1 million of those were from fans attending shows in this year alone.

Rascal Flatts began the year with their “Thaw Out 2012” tour adding 47 additional dates on the Farmers Insurance Presents “Changed Tour” to bring the 2012 year-end total to just over 60 concerts.

Their performances were enthusiastically received by the fans and critics alike. The Grand Rapids Press Gazette shared this about the concert, “The beginning, middle and end of the Rascal Flatts show were all exceptionally fun and well done.” “Lead singer Gary LeVox has a superb voice that can reach high registers like few other performers in country music today. It’s a remarkable gift,” said the Hamilton Spectator. Billboard.com’s review of the show said, “The trio’s harmonies have only gotten higher and tighter over time, and they took command of the stage from the opening notes and didn’t let loose until the show was over.”

Rascal Flatts will extend the Farmers Insurance Presents “Changed Tour” into 2013, kicking off a winter leg on January 10 with special guests The Band Perry. Visit the tour page for the latest tour information.